← The Man Who ‘Saw’ The Ripper
Wilfred Owen – A Strange Meeting →

The Haunting of Charles Dickens

The Victorians were very fond of ghost stories and the most popular authors of the period relished competing with one another to see who could make their reader’s flesh creep the most. One of the era’s best loved storytellers was Charles Dickens, though surprisingly the author of ‘A Christmas Carol’, ‘Oliver Twist’ and other classics was not a believer in the supernatural. In fact, Dickens was a hardened skeptic until he had a disquieting paranormal experience of his own… 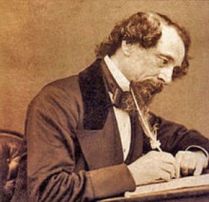 In 1861 Dickens contributed a ghost story to the popular magazine ‘All The Year Round’ which centred on an encounter between a portrait painter and a young lady in a railway carriage. During the journey, the pale looking lady inquires as to whether the artist could paint a portrait from memory, to which he replies that he probably could. When asked the reason for her question she responds, ‘Look at me again. You may have to take a likeness of me.’ Shortly afterwards they part and the painter travels on to his destination. Two years later an older gentleman by the name of Wylde calls on the artist and asks if he would accept a commission to paint a portrait of his daughter from a description as she is not available to sit for the portrait in person for she died some time ago. Puzzled but intrigued the artist agrees and begins to sketch a young lady in accordance with Mr Wylde’s description. After several failed attempts to capture her likeness, he is on the verge of giving up when in desperation he recalls the young woman whom he met on the train and uses her as his inspiration. ‘Instantly, a bright look of recognition and pleasure lighted up the father’s face,’ Dickens wrote, ‘and he exclaimed, ‘That is she!’

In the course of conversation the artist asks when the young lady had died and is told it was two years ago on the 13th September – the very date the painter had met the pale young woman on the train.

Such twists were almost a cliché, even in Victorian fiction, but what makes this particular story

significant is that it was to have a resonance in real life. Shortly after publication Dickens received an irate letter from a painter who claimed that the story was not fiction, but fact. It had been his own personal experience, which he had written down with the intention of submitting it for publication, but had delayed and was now convinced that Dickens had heard his story somehow and copied it, even down to the date chosen for the girl’s death. The painter had told the story to his friends but had never mentioned the date until the day he wrote it all down.

This is what unnerved Dickens, who later wrote, ‘Now my story had NO DATE; but seeing when I looked over the proofs the great importance of having a date, I wrote in, unconsciously, the exact date on the margin of the proof!’

From ‘The Complete Book of Ghosts’ (2007, Capella/USA) by Paul Roland

Posted on October 19, 2013, in Uncategorized. Bookmark the permalink. 1 Comment.

← The Man Who ‘Saw’ The Ripper
Wilfred Owen – A Strange Meeting →