← The Haunting of Charles Dickens
The Houseguest (a playlet) →

One of the finest poets of the Great War, Wilfred Owen—who is best remembered for his atmospheric verse ‘Strange Meeting’ in which a German and a British soldier encounter each other in the Underworld—was killed just one week before the Armistice was declared. On the day the guns finally fell silent his brother Harold, a naval officer, was overwhelmed by a feeling of apprehension and was later ‘visited’ in his cabin by Wilfred’s spirit. Harold’s reaction to the presence of his brother contrasts with the fears of fictional characters who are confronted by unquiet spirits, and for that reason his experience is strangely comforting. Harold was unaware of his brother’s death at the time of their own strange meeting.

“I had gone down to my cabin thinking to write some letters. I drew aside the door curtain and stepped inside and to my amazement I saw Wilfred sitting in my chair. I felt shock run through me with appalling force and with it I could feel the blood draining away from my face. I did not rush towards him but walked jerkily into the cabin – all my limbs stiff and slow to respond. I did not sit down but looking at him I spoke quietly: ‘Wilfred how did you get here?’

“He did not rise and I saw that he was involuntarily immobile, but his eyes which had never left mine were alive with the familiar look of trying to make me understand; when I spoke his whole face broke into his sweetest and endearing dark smile. I felt no fear – I had not when I first drew my door curtain and saw him there; only exquisite mental pleasure at thus beholding him. All I was conscious of was a sensation of enormous shock and profound astonishment that he should be here in my cabin. I spoke again, ‘Wilfred dear, how can you be here, it is just not possible…’ But still he did not speak but only smiled his most gentle smile.

This not speaking did not now as it had done at first seem strange or even unnatural; it was not only in some inexplicable way perfectly natural but radiated a quality which made his presence with me undeniably right and in no way out of the ordinary. I loved having him there: I could not and did not want to try to understand how he had got there. I was content to accept him, that he was here with me was sufficient.

“I could not question anything, the meeting in itself was complete and strangely perfect. He was in uniform and I remember thinking how out of place the khaki looked among the cabin furnishings. With this thought I must have turned my eyes away from him; when I looked back my cabin chair was empty…

“I felt the blood run slowly back to my face and looseness into my limbs and with these an overpowering sense of emptiness and absolute loss… I wondered if I had been dreaming but looking down I saw that I was still standing. Suddenly I felt terribly tired and moving to my bunk I lay down; instantly, I went into a deep an oblivious sleep. When I woke up I knew with absolute certainty that Wilfred was dead.” 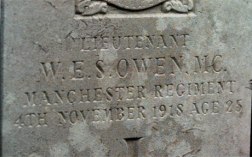 From ‘The Complete Book of Ghosts’ (2007, Capella/USA) by Paul Roland

It seemed that out of battle I escaped
Down some profound dull tunnel, long since scooped
Through granites which titanic wars had groined.

Yet also there encumbered sleepers groaned,
Too fast in thought or death to be bestirred.
Then, as I probed them, one sprang up, and stared
With piteous recognition in fixed eyes,
Lifting distressful hands, as if to bless.
And by his smile, I knew that sullen hall,—
By his dead smile I knew we stood in Hell.

With a thousand pains that vision’s face was grained;
Yet no blood reached there from the upper ground,
And no guns thumped, or down the flues made moan.
‘Strange friend,’ I said, ‘here is no cause to mourn.’
‘None,’ said that other, ‘save the undone years,
The hopelessness. Whatever hope is yours,
Was my life also; I went hunting wild
After the wildest beauty in the world,
Which lies not calm in eyes, or braided hair,
But mocks the steady running of the hour,
And if it grieves, grieves richlier than here.
For by my glee might many men have laughed,
And of my weeping something had been left,
Which must die now. I mean the truth untold,
The pity of war, the pity war distilled.
Now men will go content with what we spoiled,
Or, discontent, boil bloody, and be spilled.
They will be swift with swiftness of the tigress.
None will break ranks, though nations trek from progress.
Courage was mine, and I had mystery,
Wisdom was mine, and I had mastery:
To miss the march of this retreating world
Into vain citadels that are not walled.
Then, when much blood had clogged their chariot-wheels,
I would go up and wash them from sweet wells,
Even with truths that he too deep for taint.
I would have poured my spirit without stint
But not through wounds; not on the cess of war.
Foreheads of men have bled where no wounds were.

‘I am the enemy you killed, my friend.
I knew you in this dark: for so you frowned
Yesterday through me as you jabbed and killed
I parried; but my hands were loath and cold.
Let us sleep now….’

← The Haunting of Charles Dickens
The Houseguest (a playlet) →