← The Houseguest (a playlet)
The New Era of Silent Movies, Part I →

The Nuremberg Rituals – An invocation of Mars

In 1834 Heine published Religion and Philosophy in Germany, in which appeared this prophetic warning:

“But most of all to be feared would be the philosophers of nature were they actively to mingle in a German revolution, and to identify themselves with the work of destruction. […] the Philosopher of Nature will be terrible in this, that he has allied himself with the primitive powers of nature, that he can conjure up the demoniac forces of old German pantheism; and having done so, there is aroused in him that ancient German eagerness for battle which combats not for the sake of destroying, not even for the sake of victory, but merely for the sake of the combat itself.”

To the uninitiated the Nuremberg rallies represented a celebration of German nationalism, an adoration of the Führer and an impressive display of military might. But they were much more than elaborately staged spectacles. They were a triumph of the will, to borrow the title of Leni Riefenstahl’s film of the 1934 Nazi party rally and an invocation of Mars, the pagan god of war.

Hitler may have been an ill-educated “Bohemian corporal” (according to Hindenburg) driven by the basest human instincts, but he intuitively knew how to exploit his innate capacity for manipulating the masses into acting as one mindless mob and in so doing demonstrated that he had mastered one of the principle techniques of the black magician, whether consciously or otherwise.

But he was also shrewd enough to understand that the power of his personality was not enough to induce even his most fervent followers to swear undying allegiance to their flag, their Führer or the Fatherland. He needed to involve them in a formalized ritual so that their fate would be allied to his, for better or for worse. This was the true purpose of the Nuremberg rallies – they acted as an insidious form of quasi-religious magic ritual, a perversion of both the Catholic sacrament and a pagan consecration of the weapons with which Nazi Germany would wage war with Hitler as High Priest and his inner circle in the role of his acolytes. It was not necessary for the participants to be aware of the part they were playing. They were simply swept along on a tide of heightened emotion expertly and cynically stage-managed by Hitler’s architect Albert Speer who understood the seductive power of making each member of the crowd believe that they were participating in a heroic Wagnerian pageant and so had become part of something greater than themselves.

All of the elements for invoking the dark side of the psyche were harnessed by Speer to focus the mass ranks of the Fuhrer’s followers on a single purpose – the awakening of the collective will. 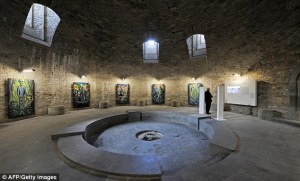 The stadium formed a magic circle from which non believers were excluded. Within this sacred space the crowds were whipped up into an ecstasy of expectation by ritual drumming, blaring fanfares, fluttering banners and the sight of mass ranks of black-shirted SS troops and brown-shirted SA stormtroopers marching in automated precision. All were designed to impress upon the onlookers the idea that they were privileged to be allowed to participate, that they were an elite, initiates of a special order and invincible, so long as they remained loyal to the body to which they belonged. The basic human need to conform was ruthlessly exploited with each section afforded their own uniforms, awards, ritual ceremonies and insignia. Even the women and children were ensnared into joining the NSF (NS-Frauenschaft, the National Socialist Women’s League), the Hitler Youth and the BDM (Bund deutscher Mädel, the League of German Girls).

As the crowds waited in the hot sun Wagner’s music evoked racial memories of Nordic heroes and the mythic tradition of Aryan supremacy after which stirring marches boasted of military glory yet to come. Banners of red, white and black fluttered in the afternoon breeze, the traditional colours of war, terror and death.

The late arrival of the Führer was designed for maximum impact, his arrival triggering the release of tension and idol worship akin to a modern rock concert.

Overlooking the ceremony stood the high priests of this black order, Hitler’s inner circle. This hierarchy was designed to give the illusion of order and of unity. In truth, Hitler’s acolytes were a self-serving rabble who would have torn each other to pieces had it not been for the overbearing personality of the Führer holding his squabbling brood together.

As dusk descended on the stadium, 200 searchlights were aimed at the sky to form what Speer called ‘a cathedral of light’. His words were well chosen. Clearly, the purpose had been to create the illusion of a magical temple. It only lacked the climactic act, a blood sacrifice to seal the pact with the dark forces they had invoked. In its place Hitler consecrated the flags of new SS battalions by embracing them to the sacred ‘blood banner’ that had been carried in the failed Munich Putsch of 1923, and which was stained with the blood of ‘Nazi martyrs’ as the crowd responded with hoarse cries of ‘Sieg Heil’. There would be a time enough for blood sacrifice in the years to come on a scale undreamt of by even their most blood-thirsty forebears.

If something profoundly evil does not lurk behind Germany’s present tyranny, where, indeed, is evil to be found? (Lewis Spence)

← The Houseguest (a playlet)
The New Era of Silent Movies, Part I →