In November 1993, on his 40th birthday, world renowned comic artist and writer Alan Moore, creator of ‘The League of Extraordinary Gentlemen’, ‘Watchmen’, ‘From Hell’ and ‘V for Vendetta’, confessed to being a practicing magician. He believed that making the  transition from artist to magician was a logical progression, but he nevertheless expected howls of derision from the popular press, pitying looks from his long-suffering family and groans from his legions of fans, who would think he had finally gone over the edge. ‘Too many drugs and too much Hawkind’, they would say. 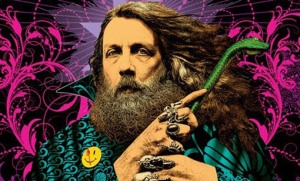 But those who were acquainted with Moore knew better. With his grizzled grey beard and long bedraggled hair he could pass for an aging hippy, but this was the man who almost single-handedly reinvented the medium of comics for a new adult audience, bringing literacy, politics and a masterly visual sensibility to a once crude and derided craft. Comics and their recent multimillion dollar movie adaptations are no longer for kids.

In fact, the word comic is now passé, thanks almost entirely to Moore, who can take much of the credit for the rise of a new art form, the graphic novel, in which stereotypical superheroes have become subversives in a sinister neo-fascist society that could never have existed in the same universe as that inhabited by the original square-jawed legion of superheroes created by Marvel and DC.

Moore is a modern Merlin, a natural successor to Crowley, Spare and Blake, but this British-born artist has the advantage of having both feet on terra firma having endured the hard knocks of the real world and having had to scramble for a living. Yet despite his wealth and fame, he continues to live in a modest terraced house in Northampton, where magical artefacts and occult volumes tumble from overcrowded shelves or vie for space with records, videos, comic book collectibles and memorabilia. His house has been described as ‘an occult bookshop under continual renovation’.

As one bemused visitor observed,”‘this is clearly a man who spends little time on the material plane”. Moore’s obsession with the occult was triggered by a casual remark he wrote in his first highly influential and ground breaking graphic novel ‘From Hell’ which retold the story of the Whitechapel murders perpetrated by Jack the Ripper.

“One word balloon in ‘From Hell’ completely hijacked my life. A character says something like ‘the one place gods inarguably exist is in the human mind.’ After I wrote that I realised that I had accidently made a true statement and now I would have to rearrange my entire life around it. The only thing that really seemed to be appropriate was to become a magician.”

Like Blake and Spare before him, Moore believes that magic is an art and that all art forms are a form of magic. Both involve the manipulation of symbols, words or images to achieve changes in consciousness.

“The act of writing is a spell of sorts. Thoughts, ideas and names are all conveyed by the medium of words and that is why words have power.”

“I found that I couldn’t progress any further with writing by strict rationality. If I wanted to go further with my writing, make it more intense, more powerful, make it say what I wanted it to say, I had to take a step beyond technique and rational ideas about writing into something that was trans-rational, if you will, this being magic. ”

Over the following months Moore immersed himself in the works of Aleister Crowley mastered the tarot and delved into the mysteries of the Qabbalah (the alternative spelling indicating the Western magical form of the tradition). His first revelation was the realization that magic occurs on a mental plane to which we all have access when we heighten our awareness of a greater reality beyond our mundane or everyday minds. To navigate this virtual reality the magician needs a system that provides a map, the most practical being the Kabbalistic glyph known as the Tree of Life. In his early explorations Moore had used drugs to attain an altered state, but he quickly realised that this dulled the senses and led to disorientation. But even without psychedelics, he still found these initial forays a frightening experience. “You call out the names in this strange incomprehensible language, and you’re looking into the glass and there appears to be this little man talking to you. It just works. “

Less than two months after his ‘coming out’ party, Moore had what he considered to be his first magical experience. He was performing a ritual with a friend when they were both struck by what felt like a non-lethal bolt of lightning.

“It felt like an extraordinary intelligence passed through both of us; I was quite prepared to admit that this may have been all complete hallucination, except for the fact that I had somebody else with me who was experiencing the same things.”

Even though he readily admits that he didn’t always understand what he saw or encountered, he knew he had to continue until he could make sense of his experiences. To assist him on the astral plane he adopted an ancient Roman divinity, the serpent god Glycon. He knew Glycon was a false god, but he adopted this particular deity anyway, because the snake is a powerful image. 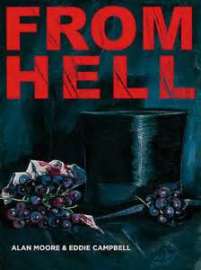 Moore did not need to be told that imagination was the key to occult experience and that the world of the imagination is not to be confused with fantasy, but is another reality. Magic, he explained, was a method for dealing with the invisible world, the world of ideas from which everything in the material world has its origin. The divinities and demons of our ancestors were the names they gave to inner forces they did not yet understand and so they personified them to help them interact with these inner attributes. The world of ideas is therefore more real than the material world, even though it is not a physical reality. Ideas, Moore reminds us, are immortal, immaterial and universal, but they remain elusive and impenetrable without a system to give them structure in our minds and that is what ritual magic can offer.

“The most peculiar entities that I believe myself to have encountered, including presences which appear to be genuine gods, have seemed to me to be at once utterly alien or other, and at the same time have seemed to be a part of myself.”

Inevitably, his insights and experiences inspired a new comic series – ‘Promethea’, the story of a teenage girl possessed by a pagan goddess. “I wanted to be able to do an occult comic that didn’t portray the occult as a dark scary place because that’s not my experience of it.”

Moore is clearly no dabbler, but an adept and one who will inevitably attain a high degree of insight, because he has the humility that Crowley and his more psychologically unstable forerunners lacked. Speaking of his experiences exploring the paths and spheres of the Kabbalistic Tree, he confessed: “The sixth is as high as I ventured as yet and people who know a lot more about it than I do have advised me that there is less and less to actually experience the higher you get, while the dangers get more and more severe. Kether, the highest allegedly attainable point, is in one sense nothing more than the initial concept of existence itself; there may be magicians who have gone there, but if so they never came back.”

God as envisaged by the founders of the western religions has no place in this pantheistic universe where the divine life force and every living thing in existence are indivisible. Moore has no issues with the creator – it’s the middle management that he objects to. In Moore’s popcorn philosophy, God is akin to Elvis and religious authorities are all clones of ‘Colonel’ Tom Parker, marketing his property to those starving for spiritual sustenance. Many might consider that it takes more than a leap of faith to connect comic books and pop culture with occultism, but as Moore observes, the graphic nature of comics seems to stimulate the right-hand hemisphere of the brain, the side that relates to the imagination, or the underworld of the unconscious.

His distrust of organized religion aside, Moore acknowledges that Judaeo-Christian symbology and concepts are crucial to magical thought and he has admitted that his own workings have touched upon some of these areas “with a fierce intensity”. One of these rites involved a vision of the mysteries of the crucifixion, “…and it goes without saying that something like that certainly leaves an impression. I would imagine that my personal notion of Jesus is possibly a great deal more immediate and real than that of a great many people who would profess to be practicing Christians.”

In Moore’s opinion, the various religious can be compared to the languages of the world, each expressing the same ideas in a different form, while magic can be likened to linguistics, the science of language. Magic, according to Moore, is not a ticket to an alien environment, but a new way of seeing the world around us, a different way of perceiving what the rest of us take for granted.

“I’ve heard it said that all of our human perceptions might be seen as our individual windows on the universe. The magician is consciously attempting to alter his or her window’s width or its angle, so as to get a different view of the landscape outside. The schizophrenic on the other hand, has had his or her window kicked in by some great big astral skinhead in Doc Martens boots. Both are experiencing the same flood of phenomena and probably many of the same perceptions. The magician, however, has a means of processing this information.”

He likens magical consciousness, the altered state of heightened awareness, to a musical fugue in which many melodic lines are played simultaneously. The listener can choose which strand to focus upon or simply allow the counterpoint to wash over them, although he admits that during a magical operation the images and sensations are not always as harmonious, nor as uplifting as the musical variety. It is more likely to be ‘disorientating, overwhelming even terrifying’.

“I suppose I’d have to say, that for anyone who has had, or believes themselves to have had, an extra-normal experience, a reaction of pant-shitting holy terror is only to be expected as are all sorts of confused and meaningless spiritual anxieties dredged up from what vestigial religious upbringing you went through or whatever hysterical Dennis Wheatley occult novels we happen to read during our formative years; the further I explore these ideas, however, the more it seems to become apparent that concepts like ‘good’ or ‘evil’ mean absolutely nothing above a certain fundamental human level. A bit higher up still and even things like individual consciousness have no meaning…the entities that we traditionally think of as ‘other’ are in a sense nothing but ourselves unfolded—or at a higher frequency.”

From: Dark History of the Occult (2011) by Paul Roland

for H.P. Lovecraft – The Cult of Cthulhu, see main page