The Man Who ‘Saw’ The Ripper

It is not an exaggeration to say that today psychics are consulted on an almost routine basis when the authorities have exhausted all conventional avenues of investigation. But in Victorian England ‘spiritualists’, as they were then known, were regarded at best as being either a novelty Music Hall act or at worst, fraudsters preying on the weak-minded and bereaved. The fact that clairvoyant Robert James Lees had been consulted on several occasions by Queen Victoria did not, however, make him a credible witness as far as Scotland Yard were concerned. When Lees offered his services as a psychic sleuth it is said that they laughed him out of the building. However, if the account published by ex-Scotland Yard officer Edwin T. Woodhall (author of ‘Secrets of Scotland Yard’) is to be believed, they were soon to regret their rash decision.

END_OF_DOCUMENT_TOKEN_TO_BE_REPLACED

A Most Singular Specimen

It was a loathsome thing indeed that lay prostrate on Dietrichson’s dissecting table, a huge grub almost two feet long and eleven inches around the girth which contracted and expanded with each dying breath. Folds of glistening white skin rose and fell in regular rhythm, until at last it expired with a burbling hiss. The gas had taken its effect. Dietrichson put aside the moisture-clouded glass dome which had acted as a killing jar and examined the grub with his magnifying glass.

END_OF_DOCUMENT_TOKEN_TO_BE_REPLACED 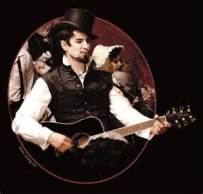 It may be of little concern to the bureaucrats who drew up the Trade Descriptions Act, but it’s an undeniable fact that there isn’t much punk in steampunk. At least not of the three-chord thrash variety spat out by the snotty, glue sniffing, safety pin and spiky hair, pogo-till-you-puke brigade who stormed the barricades back in ’76, or ‘Rock’s Year Zero’ as the NME would have it. Back then it was ‘Anarchy In The UK’ and the wholesale slaughter of the dinosaurs of corporate rock. Now it’s more like anachronistic fashion accessories in the UK and US as the likes of Abney Park, Sunday Driver and Vernian Process describe a dystopian fantasy world through rose-tinted goggles with a sentimentality that would make the late Bill Grundy doubt he could goad them in to saying something risqué about Queen Victoria.

END_OF_DOCUMENT_TOKEN_TO_BE_REPLACED

In 1985, just prior to the release of the ‘VU’ album (a collection of previously unreleased tracks recorded in 1969 and intended for their fourth album), I had the privilege of interviewing Nico, Sterling Morrison and Maureen Tucker for a national Sunday newspaper. At the end of each interview I mentioned that I was preparing a new album (to follow ‘Burnt Orchids’) and asked if they would consider playing on it, if I could get the multi-track tapes shipped to the States. They agreed and Sterling seemed particularly keen as he was eager to get back into music after taking time out to study for a university degree. I remember that he was very complimentary about my songwriting after he heard the tapes (backing tracks with guide vocals, not demos) and in a couple of telephone conversations he mentioned that he found the structure of the songs unusual and that interested him. But the tape formats were not compatible with the equipment in the studio he was using at the time and I let the project lapse, assuming that we would sort it out at a later date. I even had a letter from his attorney asking me to give him extra time, but I had an offer from UK psych label Bam Caruso and needed to deliver an album by a certain date, so I shelved the songs I had written for the VU and moved on. Then, sometime later, Sterling died and so did Nico.

It was not until last year, 27 years(!) after writing those songs that I thought of digging them out, dusting them off and recording them as I had been itching to get back to playing with a rock band after a year spent creating a solo acoustic project (‘Grimm’). The resulting album, ‘Bates Motel’ (which also includes songs written for a John’s Children reunion album at the invitation of frontman Andy Ellison), is released next month on the German label Sireena Records.

END_OF_DOCUMENT_TOKEN_TO_BE_REPLACED

During the early 1980s I was writing for a number of film and music magazines and, being a huge horror movie buff, I naturally took the opportunity to suggest a Hammer feature at one of Kerrang’s weekly editorial meetings. It is basically an introductory overview of the studio’s horror output and for reasons of space omits reference to a couple of my favourite Hammer filmsm ‘The Witches’ and ‘Captain Kronos – Vampire Hunter’, but for those who are not hardcore Hammer fans it may be of interest for the brief quotes from Christopher Lee and the various Hammer ‘House’ directors. (My interview with Peter Cushing can be found elsewhere on this site).

END_OF_DOCUMENT_TOKEN_TO_BE_REPLACED

Paul Roland (still) braves the curse of the critics to trace the history of Hammer, the House of Horror

The following year, Hammer released no less than three films, two of which have since become classics of the genre, while the third, ‘The Two Faces of Dr Jekyll’, remains an interesting curio. Jekyll featured Paul Massie in the title role, portraying Dr J as a bearded, insensitive scientist, and his primitive half as a handsome, clean-shaven sadist. A unique interpretation and one which easily stole the acting honours from Christopher Lee, who had been relegated to a minor supporting role.

END_OF_DOCUMENT_TOKEN_TO_BE_REPLACED

H.P. Lovecraft – The Cult of Cthulhu

From: Dark History of the Occult (2011) by Paul Roland

In a dark and forbidding corner of one of London’s more obscure occult bookshops stands a rack of extraordinary prints depicting hideous bug-eyed creatures that would give even the keenest naturalist nightmares. Should a customer take an interest in the display, the balding, bespectacled owner will emerge from behind the counter to explain the significance of these loathsome beings. Such creatures, he will tell them, are not figments of the artist’s fevered imagination but elemental spirits he encountered on the astral plane.
The fact that these eldritch horrors bear a striking resemblance to the winged and multi-tentacled entities described by the American pulp horror writer Howard Phillips Lovecraft (1890–1937) is due, we are to understand, to the fact that Lovecraft had encountered these very same creatures during his uncommonly vivid dreams. Lovecraft dismissed them as mere ‘Night-Gaunts’, but then he felt compelled to do so, because he had a genuine fear of being overpowered and driven insane by the power of his own imagination. He did not want to die in a lunatic asylum as his father had done. Consequently, in letters to friends and admirers, the Providence-born writer readily admitted that his ‘black pantheon’ of nameless horrors was ‘one hundred per cent fiction’.
And yet many practitioners of the forbidden arts argue that artists and writers possess an acute psychic sensitivity as a consequence of exploring the furthest regions of their imagination, which stimulates the areas of the brain associated with extrasensory perception—a latent faculty the mass of humanity might have lost during the course of our evolution. END_OF_DOCUMENT_TOKEN_TO_BE_REPLACED

Paul on tour in Greece

Paul will be playing at the Gagarin 205 Live Music Space in Athens tonight, 15 December 2012.

Last Tuesday, 11 December, he appeared on the Greek TV show “Radio Arvyla”, a satirical news show, on the Thessaloniki-based TV channel ANT1. Paul played an acoustic medley of “Re-Animator” and “Gabrielle” (the latter being a popular song in Greece) for which he was joined by his 14-year-old son Joshua on bass guitar.

On Wednesday, 12 December, he appeared at the “Ζωντανή Μαύρη Τρύπα” (the Black Hole Live) club in the historic Ladadakia quarter of Thessaloniki supported by Giannis Kyratsos. Videos of the performance can be found on Paul’s facebook page and on the Paul Roland Music Television and the kazandbtv YouTube channels.

For more information, please visit Paul’s facebook page or that of the PRAS.

Great news! Paul tells us he has now completed the new album and is delighted with it (as he hopes you will be too, when you hear it). The artwork is currently being finalized and we’re waiting to hear which label(s) will be releasing it and when.

Looks likely there will be an Italian, German and possibly even a US release on CD and LP for the vinyl junkies amongst you – who still hang on to their turntables.

We had such a positive reaction to Paul’s interview with blues legend John Lee Hooker that we persuaded him to brave the cobwebs and the creepy crawlies in the crypt of Roland Towers in search of more archive interviews. We’re delighted to say that he emerged some hours later with four more transcripts, The Velvet Underground, actor Peter Cushing, Ian Anderson of Jethro Tull and this one – a conversation with Mark E. Smith of The Fall.

Mark E. Smith has a reputation for being a rather prickly character, but I found him very pleasant and easy to talk to. The interview was conducted for the now long defunct ‘Stereo’ magazine sometime in 1983, if memory serves me correctly, and by necessity focused on his Hi Fi and record collection, but is interesting nevertheless.

“Beware of strangers bearing gifts”, it is said. And when someone lent our hero a cash & carry card, he ended up with a queer old set up, a Sovereign S45 music centre.

“It’s got a really cheap fuzzy sound,” confessed Mark, “but I was poor at the time and someone lent me their Arbour credit card. I bought the cheapest thing they had. It’s like a radiogram without a radio. A one-piece system. I bought it about a year ago and it cost around 125 pounds at the discount price and is made in the UK. But I couldn’t say how many watts it is. It can be loud though. I like a lot of volume.” END_OF_DOCUMENT_TOKEN_TO_BE_REPLACED

Posted in Paul Roland, The Fall