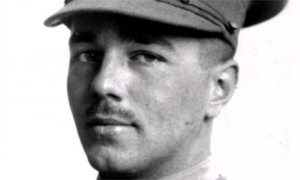 One of the finest poets of the Great War, Wilfred Owen—who is best remembered for his atmospheric verse ‘Strange Meeting’ in which a German and a British soldier encounter each other in the Underworld—was killed just one week before the Armistice was declared. On the day the guns finally fell silent his brother Harold, a naval officer, was overwhelmed by a feeling of apprehension and was later ‘visited’ in his cabin by Wilfred’s spirit. Harold’s reaction to the presence of his brother contrasts with the fears of fictional characters who are confronted by unquiet spirits, and for that reason his experience is strangely comforting. Harold was unaware of his brother’s death at the time of their own strange meeting.